Happy Way-back Wednesday! Last Christmas I was given a sewing box full of thread and sewing notions that had belonged to Greg’s grandmother.

It was fun to pick through it and compare prices, see brands that have persisted and brands that I’ve never heard of, and learn about sewing “back in the day”. 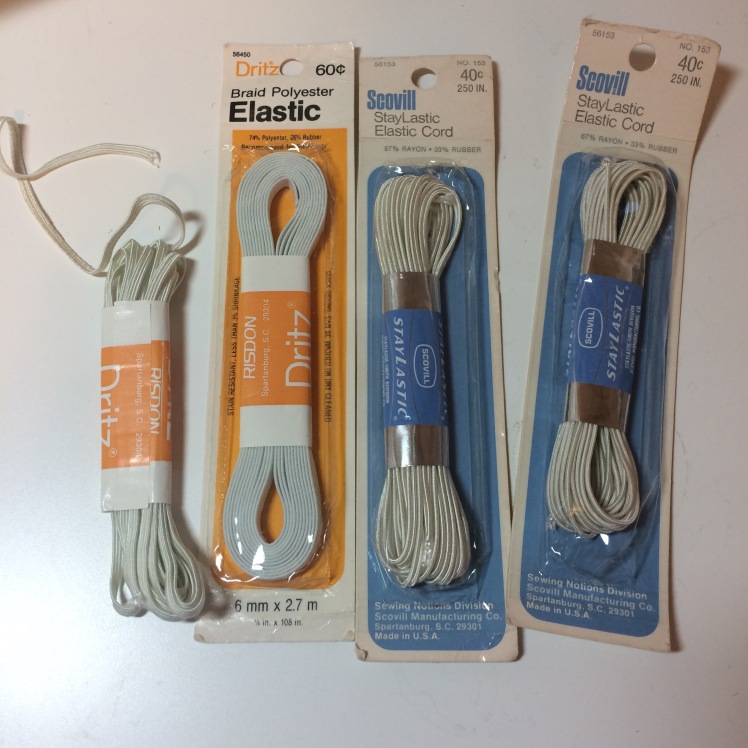 The elastic itself has degraded. Dritz we all probably recognize. Scovill was a new-to-me company. Note the packaging reads “Sewing Notions Division/Scovill Manufacturing Co.” They were founded just a few years after the American Revolution in 1802 and are still around, as Scovill Fasteners, and they do still make apparel fasteners (snaps, zippers, grommets, etc.) but it looks like they mainly supply larger apparel manufacturers, rather than sell retail items to individual consumers. 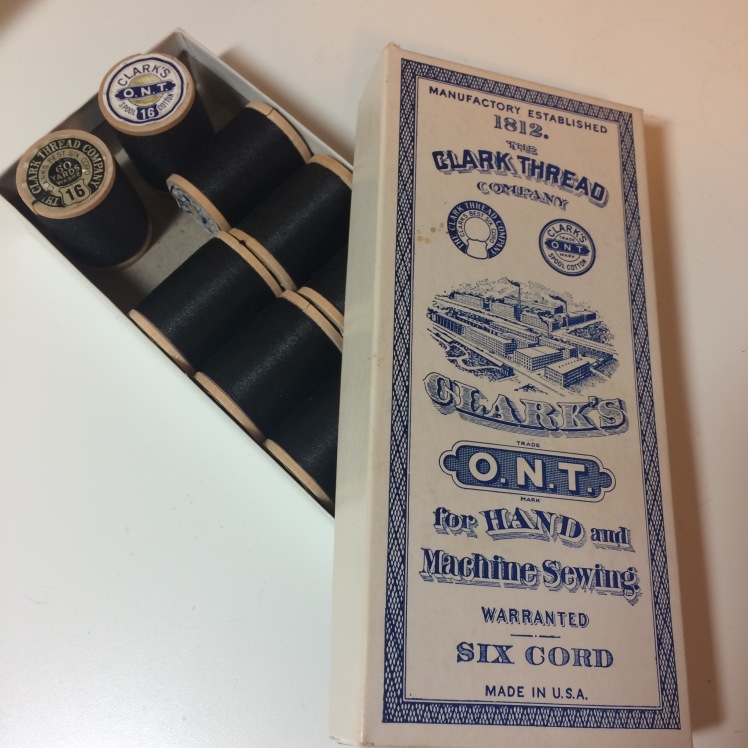 Clark’s Thread Company, before it became Coats & Clarks as a consolidated brand name in 1952. This company’s history includes the claim that the Clark Brothers invented cotton tread in the very early 1800s, replacing linen and silk which were previously used. The Clark Thread Company, founded in 1812 in Scotland, eventually opened a manufacturing plant in the United States after the American Civil War. The Coats company also opened a manufacturing center in the United states and the two companies merged in 1896, but kept their separate brands. Coats was founded by another Paisley, Scotland weaver and both companies’s mills were players in the British Industrial Revolution.

This story is such a great example of the economic pressures that influence innovation. The Clark brothers only played around with twisting cotton threads together because silk thread had become unbearably expensive due to Napoleon Bonaparte’s blockade around Britain. And the main reason both Clark’s and Coats opened factories in America was because the high tariffs caused by the Civil War made importing thread to America too costly.

And here are some more examples of threads from the collection.

I like that these snaps come in assorted sizes.

I find myself giggling at the “It’s like pretty underwear” tagline on the flexi-lace seam binding. This must have been shortly after spandex entered our sewing world. With lingerie sewing taking over the sewing community recently, it is worth remembering what I take for granted – stretch lace and mesh in every color imaginable.

A longer than expected baby nap resulted in a fully assembled garment. All that remains are the finishing details - serging the waist seam, hemming the sleeves and the bottom, and adding a bias tape facing to the neckline.
Six seams stiched, clipped, and pressed.
This sweet child gifted me some sewing time while he played on the floor and napped. The pieces are cut and edges are serged.
Baby’s first snow.
It took a few weeks to try this, but I think I might be able to babywear and finish embroidering my constellation quilt (designed by @hapticlab). #motherhood #sewcialists #sleepdeprivedmama #postpartumproject
Merry Christmas and Happy Holidays! 🎄
Loading Comments...
Comment
×
<span>%d</span> bloggers like this: