I have never had this many knitting projects cast on at the same time. I was impatient. There were too many ideas floating around my head. Too many yarns in my stash. Plus a couple projects were going to require more space and focus than I had on the bus rides to work. So rather than devote time to finishing those at home…I spent time searching Ravelry of new projects to knit on the bus.

My goal is to finish at leas two of these before the end of 2016 – the slipper boots and the dragon wing shawl. The other two I hope to finish in early 2017.

For years I have wanted a pair of slipper boots that went up to my knees and kept me cozy on a winter weekend. If you are familiar with MukLuks, those are along the lines of what I’ve wanted, but without all the crazy pom-poms and patterns. I just want something simple. Two weeks ago I remembered that as a knitter I could probably make my own!

A couple searches on Ravelry and Pinterest led me to this free pattern from the Patons yarn company. Available on Ravelry here.

I just started the cable pattern of the first slipper. The pattern itself is not difficult, but the instructions are written a little haphazardly, requiring me to look at three different sections just to complete a row. I noticed one Raveler created the grid pattern for this design, but I have never used one of those and don’t want to start mid-way through a slipper. 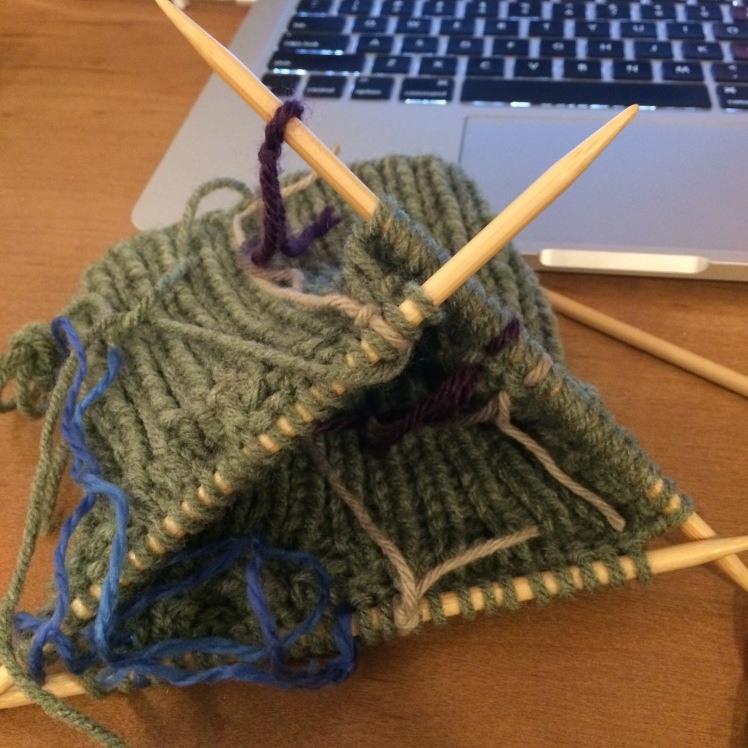 I’m using free yarn I took from home, a discontinued Red Heart line of yarn called “TLC Heathers“. It is 100% acrylic and scratchy. I will be lining these with some jersey when I finish.

I need to purchase some leather slipper bottoms to sew to the knitted socks. (I have also added the clip stitch markers to my christmas wish list, when I realized that the circular ones were going to slide off the double pointed needles.)

This is a shawl worthy of a Khaleesi. AND it is a Free Ravelry download. If you have a geek, Game of Thrones fan, or general dragon lover on your gift list, consider making them this shawl.

I liked the example so much that I copied the navy blue color. I have just finished the main shape of the shawl. I need to add a couple rows to finish, drop the intended stitches for the wing ridges, and bind off. It is all garter stitch and knits fast.

I am using a Knit Picks yarn called Mighty Stitch, in Navy (lot 1508). It is a 20% super wash wool/ 80% acrylic blend. It is really really soft. I have never used this yarn before so I don’t know how it will hold up to wear.

I cast this project on over a year ago and stopped because the yarn I was using was so old that it was breaking every couple feet. Despite the frustration, I did not frog the project.  I don’t know if that was laziness or if I held out hope that I might return to it. The pattern is named for Arya Stark of Game of Thrones, one of my favorite characters. It is available on Ravelry for $4.00.

I still really like how this cowl looks and I think I am going to try to resume knitting. But first I am going to unwind the skeins and see how bad the damage is, rather than discovering  breaks as the yarn hits my needles. I might find that the interior of the skein is less damaged than the outer layers. 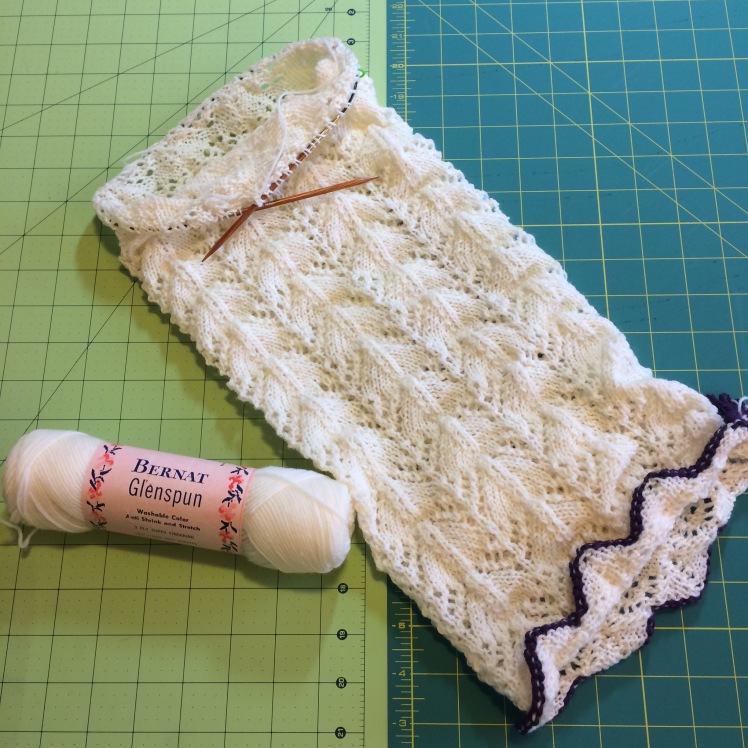 The Bernat Glenspun yarn belonged to my grandmother. It is so delicate. I love how the pattern looks.

I found this pattern through Pinterest. I’m not sure that the yarn I am using (Shine Sport by Knit Picks, 60% pima cotton, 40% modal) is the right choice, but I needed to find a use for this yarn and a loose, drapey spring-summer top seemed as good an option as any other.

I originally bought a warm brown yarn for a cardigan, but it turned out to be an ugly olive-brown color when I got it, so I returned it and chose a sweet orange-peach color called “grapefruit” and this yarn also turned out to be brighter than I expected. At this point, I probably should have returned it for another yarn. But I was tired of the back and forth. I had bought the yarn intending to use it for a cardigan pattern, but this color didn’t work as a cardigan. It thought it might work as a solid top.

The pattern is available on Ravelry for $6.00. Already I have doubts that my top will be as drapey as the one on the model. My gauge looks too tight. Even if this one doesn’t work out, I will likely try to make this top again in the future. (Mostly I just want this model’s style.) 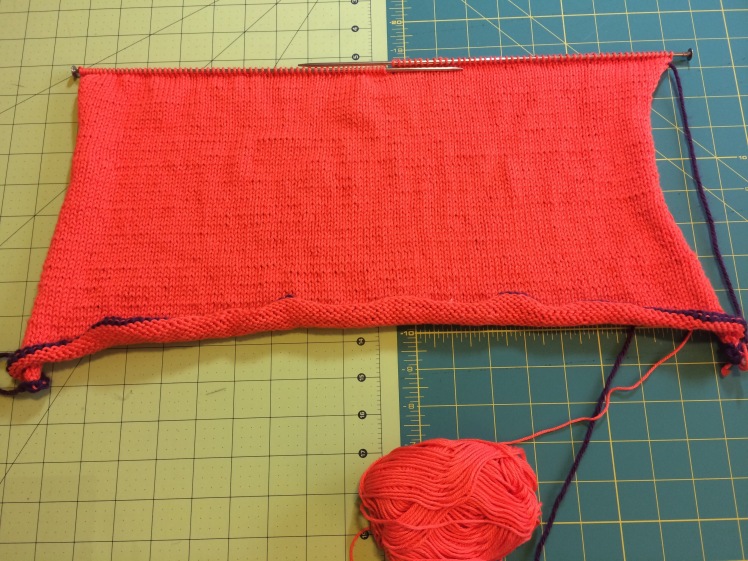 So what are you knitting right now?

One thought on “Four Knitting WIPs”